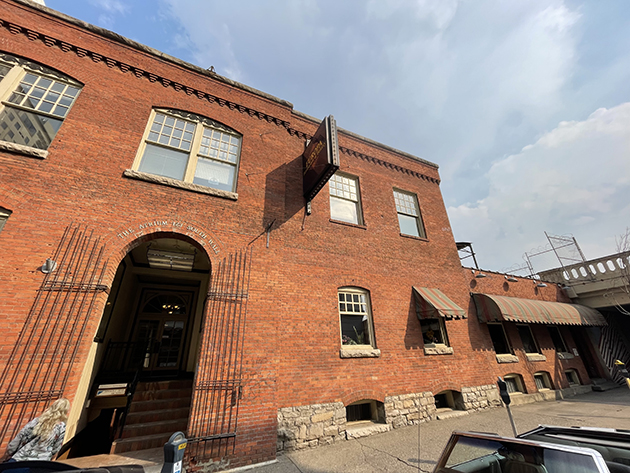 The Armour Building, constructed in 1902 with a one-story addition added in 1916, meets Spokane Register of Historic Places under Category A as typical railroad corridor warehouses constructed during the city’s most significant period of growth, 1900 to 1910 as well as the addition added at the time of the construction of the railroad viaduct in 1916. The building has had three primary uses in commerce and industry - first as a storage/warehouse building built and occupied by Armour & Company between 1902 and 1924 as a meat processing and warehouse facility; second as the original electrical equipment manufacturing building for a prominent Spokane manufacturing company, Columbia Electric; and third as the Atrium, a collection of unique shops, restaurants, and Magic Lantern Movie Theater, owned and designed by one of Spokane’s notable mid-century architects, Kenneth Brooks. The commercial vernacular brick warehouses throughout Spokane are working-class buildings that were designed for warehousing and had the structural stability to perform in this function. They have a utilitarian aesthetic and are simple in material, form and detailing. The Armour warehouses retain much of their original character as railroad warehouses with the adjacent backdrop of the elevated Northern Pacific Railway viaduct. The Armour Building is also eligible for listing on the Spokane Register under Category C, architecture.