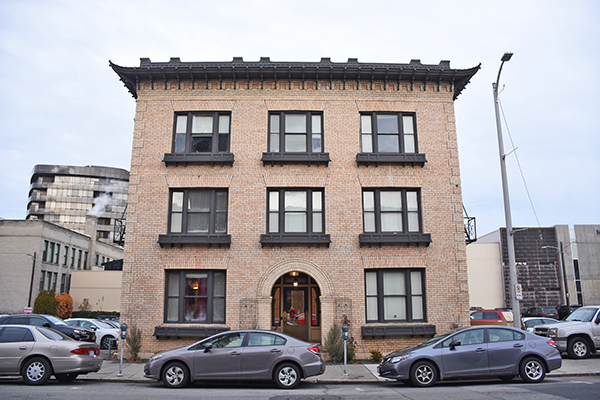 The Myrtle apartment building is a three-story unreinforced buff brick structure that rises from a raised basement platform. The building was built in two steps, the first in 1904 and fronting along Sprague Avenue, and the second in 1913 as an addition to the rear that doubled the size. The symmetrically-arranged front façade is segmented with a central mass and end wings that are set far back from the front façade plane. The front elevation’s central segment is divided into three bays, a centered entry bay with one window bay flanking each side. Short recessed wings extend to either side of the front façade, about five feet from the central front façade mass; and each contains a single window bay on each of the three upper floors and the basement (indentations along both sides allow light to enter the rear apartments). On the east side is a stairwell that provides access to a door into the basement. The centered round arch entry is defined by slightly projecting brick pilasters, topped with corbeled brick capitals, and corbeled arch extrados. The flat-arch windows are tripartite, divided by thick molded mullions into three sections, a middle section and half-width sidelights. The sash is one-over-one in each section. A pressed tin flower planter box is below each window opening. The building is terminated by broad bracketed cornice eaves supported by narrow scroll brackets above which is a crenelated parapet cap. The pressed tin cornice achieves a pagoda effect by flaring upward to a point at the corners. The roof is flat built-up tar composition.