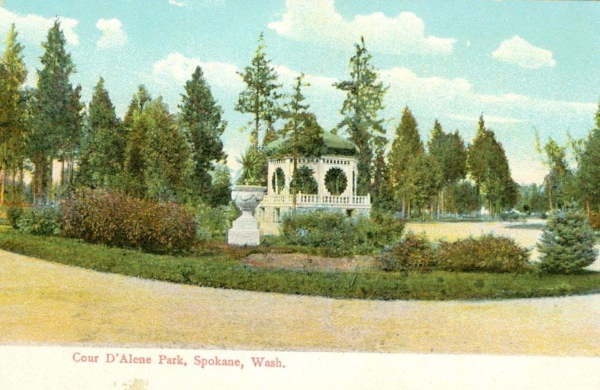 Coeur d’Alene Park is an eleven acre park comprised of four residential blocks and, according to original plat maps, measures 675 feet on its north and south sides, and 630 feet on its east and west sides. The park is located within the Browne’s Addition Neighborhood and the Browne's Addition Historic District. The park’s topography is relatively flat and surrounded by residential development (including single-family homes and multifamily apartment buildings), a church, and a few commercial enterprises in adaptively reused historic-period homes.Contributing resources include two stone urns (ca. 1893), one granite and one Tenino sandstone, that were featured in the Washington State art exhibit of the 1893 Chicago World’s Fair; a reconstruction of the original band pavilion (ca. 1891, 2013), designed with original plans; and a restroom building (1948) and drinking fountain (1948), both constructed in the distinctive blind-mortared, native basalt rubble rock style common to City of Spokane parks.