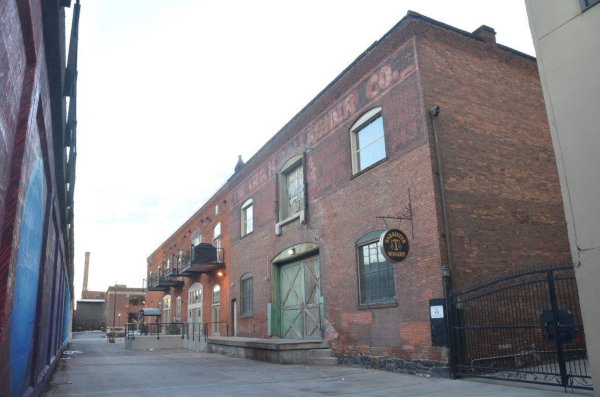 The Hobson Building is a two-story brick vernacular warehouse on the south side of Railroad Avenue between Jefferson and Adams streets in west downtown Spokane. Built in 1908 for the George H. Gallagher Co., the 60' x 120' building retains its basic form and openings with its primary facade facing north along the railroad. The building is an addition to the west end of a similar two-story brick warehouse that was built in 1906, also by the George H. Gallagher Co.

Resting on basalt rubble basement walls, the unreinforced red brick structure is supported by a wood post and beam structure and topped by a flat roof. The front façade (north) is divided into three bays within a flat brick wall terminated by a brick corbel cornice. Accessed from a raised concrete loading dock, a centered, segmental arch loading bay with large wood doors dominates the first floor. A second floor loading bay door is directly above. Segmental arch window bays flank the loading bays on both floors. The building demonstrates the adaptation from the at grade loading dock to the second story loading platform/bridge after completion of the viaduct in 1916 (1916 concrete bridge removed).