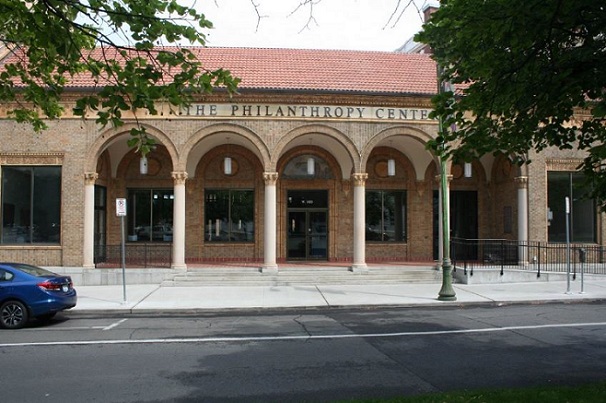 The Spokane Civic Building, built in 1931 by noted Spokane architectural firm, Whitehosue & Price, is an outstanding example of Italian Renaissance architecture and possesses beautiful architectural elements characteristic of the style including the distinctive red Spanish tile roof, symmetrical arrangement and elaborate front porch, also called a loggia, with its impressive arcade of round arches and Classical Order columns.  These universal classical traits are combined with other ornamentation that give the building a distinctly Inland Empire feeling through the use of motifs based on local products and activities, such as the pine cone, apple and wheat sheaves designs and in the use of the war bonneted Indian heads.  Originally home to the Spokane Chamber of Commerce, the building housed numerous organizations and civic groups throughout the years including the Spokane News Bureau, the U.S. Bureau of Reclamation Spokane office and the Spokane Agricultural Expo.  The Spokane Area Chamber of Commerce moved to a larger building at 801 W. Riverside in 2003 and the building is now primarily occupied by the Empire Health Foundation.

The Spokane Civic Building is a contributing property in the Riverside Avenue Historic District which was listed on the National Register of Historic Places in 1976.