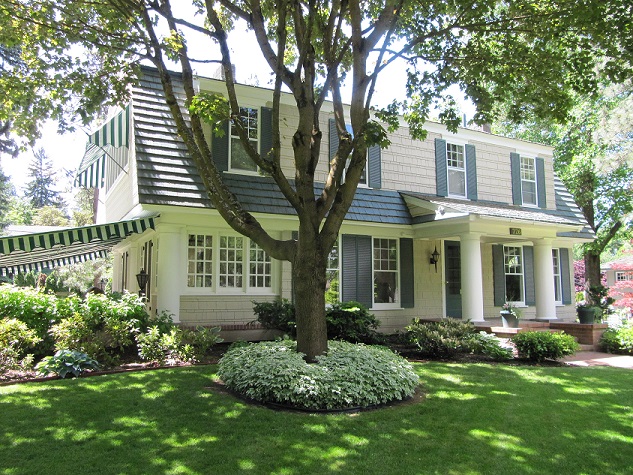 Built in 1914, the Dr. Charles & Edith Rigg House is a hallmark example of the Dutch Colonial Revival style and a product of master historic Spokane architect, Archibald G. Rigg, brother to Dr. Charles F. Rigg, for whom the home was designed.  The house was custom-built for Dr. Rigg and his wife, Edith Beck Rigg, and was owned by the Rigg family for 35 years from 1914 to 1949. According to his 1928 obituary in the Spokesman-Review newspaper, Dr. Rigg was beloved as “one of the most popular physicians in Spokane” and served an important position with the Spokane Police Department as the department’s surgeon for 15 years until his death. Shortly after it was erected, a photograph of the Rigg House was featured in the October 4, 1914 edition of the Spokesman-Review, which described the home as a “New England colonial type” with “artistic…novel and striking architectural features.” The newspaper reported the property had an $8,500 construction cost and was built in the “fashionable Rockwood residential district.” In 1921, a professional architectural journal, The Architect and Engineer, featured the Rigg House as one of “The Five Most Notable Small Houses in Spokane.”

The Rigg House is a contributing property in the Rockwood Historic District, listed on the National Register of Historic Places 4/14/1997.