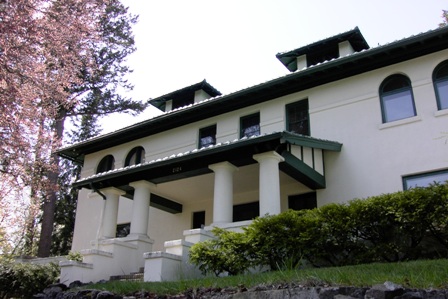 Perched on the top of a steep north-facing hillside, the Witherspoon House was built in 1912 as a large, imposing two-story home with creme-colored stucco cladding, arched windows, and a green Spanish tile roof. It is a fine example of the Italian Renaissance style. The home was custom-designed for dynamo Spokane business leader, “banker, mining man, and attorney,” Archibald W. Witherspoon, and his wife, Eda Mauseth Witherspoon, who lived with their three children at the property for 16 years during Witherspoon’s most productive time of life. “Prominently identified with the civic, business, and industrial life of Spokane,” A. W. Witherspoon founded the law firm of Witherspoon, Witherspoon & Kelley (now Witherspoon, Kelley, Davenport & Toole), and was noted as “one of the oldest members of the bar in Spokane” during his career. Witherspoon had a great impact on Spokane business, achieving a reputation as an expert on corporate restructuring and reorganization, and “was so well-respected by his peers and clients that he served on the boards of more than 75 corporations in the Inland Northwest.”

The Witherspoon House is a contributing property in the Rockwood Historic District, listed on the National Register of Historic Places 4/14/1997.