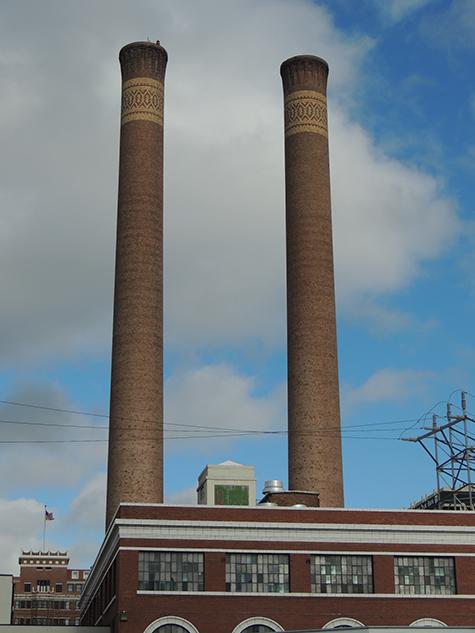 One of Spokane’s most prominent skyline features, the Central Steam Heat Plant, with its graceful twin smokestacks, is historically significant for its role in the evolution of the power industry in the Inland Northwest, and its seventy-year contribution to sustaining a major share of downtown Spokane’s buildings. Built in 1916, it provided heating to more than 300 Central Business District (CBD) structures. Designed by renowned Spokane architects Cutter & Malmgren, the Steam Plant’s architecture is notable both for its engineering and design. It exhibits particular quality in its construction and attention to finished detail. The equipment was innovative in the Inland Northwest in 1916, when it began operation. Representative of an enterprise common but frequently short-lived in a number of cities across the northern states, the plant underwent a series of changes in the generation of heat and power and remained operational until 1986. After a period of vacancy it was renovated and reopened as Steam Plant Square, offering unique restaurant, office, and commercial spaces.

Steam Plant Square was listed on the National Register of Historic Places on its own merit and as a contributing property in the West Downtown Historic Transportation Corridor in 1999.