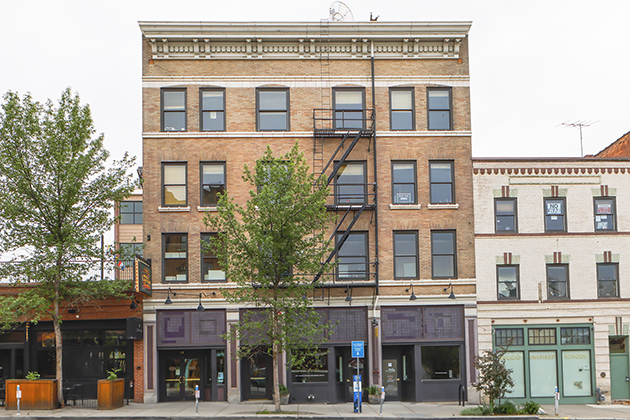 Owner H. H. Hutton had this building built in 1909. A fine representative of Spokane’s Single Room Occupancy Hotels in the Central Business District, the hotel housed on the upper floors has always been known as the Saranac, although it was also listed under furnished rooms as the Hotel Margurett in the 1910 directory. Early occupants of the commercial spaces included a second hand store in 1909 and Eli Woisnovich grocer in 1914. City Hand Laundry was a fixture in the building during the 1930s, 1940s, and 1950s. Other commercial tenants included B. C. Riblet Aerial Tramway during the 1930s, and Herman’s Cabinet Shop and North Coast Supply Co. grocers during the 1940s and 1950s. This four-story red brick building has a buff brick facade with terra cotta trim. The upper floors have four window bays with bays of paired 1/1 wood sash windows flanking two bays of single 1/1 wood sash windows. A fire escape runs down the front of the westernmost of the central bays on the top two floors and extends to cover both single bays on the second floor. The ground floor is divided into three storefronts by cast iron piers, now painted green, which also frame the main hotel entrance offset east of center.

The Saranac is is a contributing property in the East Downtown Historic District, listed on the National Register of Historic Places 8/29/2003.