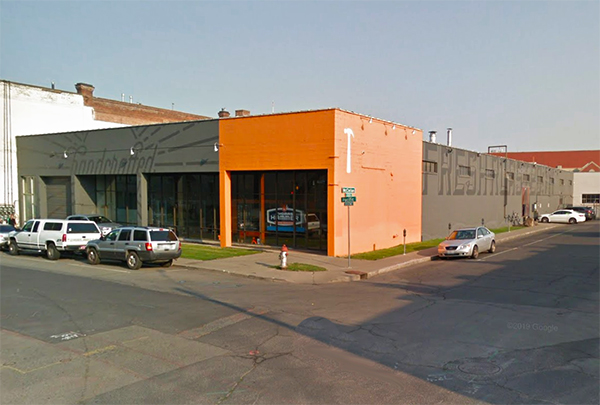 The Roundup Grocery/Thomas Hammer Building, a former rail corridor warehouse, is associated with Spokane’s railroad corridor warehouse history. As a warehouse the building is a specific property type within that district. The warehouse building served as a transfer point for materials shipped into Spokane via the Northern Pacific Railroad to serve the market of Spokane and Inland Northwest. Most all of the warehouses in the Pacific Avenue produce district were built at or near the turn of the twentieth century, between 1892 and 1911. The buildings were predominately oriented toward the railroad, the major carrier of goods, with docks along the rail spurs. At the other end of the dock or other side of the building was the horse drawn wagon and as the years progressed from 1910 to 1920 through the 1950s, the truck, growing in size from a six-foot flat bed to a forty-foot semi trailer. Thus when these buildings were built they dealt with the massive load-carrying capacity of the rail car on one side and the relatively small capacity of wagons and trucks that were used to distribute the broken-down lots of goods that had been shipped in by rail.

The Roundup Grocery Warehouse is a contributing property in the East Downtown Historic District, listed on the National Register of Historic Places 8/29/2003.