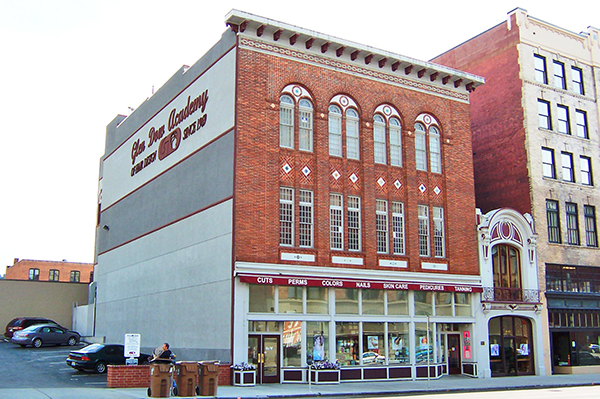 The three-story Robertson building, designed by the influential architectural firm of Cutter and Malmgren, was financed by attorney Frederick C. Robertson, a man who has unfortunately been largely forgotten but played a major role in regional history. Between 1899 and 1902, Robertson defended striking union miners in the Coeur d’Alene district after martial law had been declared and hundreds of workers had been incarcerated. Robertson held that the martial law and confinements were unconstitutional; he prevailed and the martial law order was lifted and the miners released. He was also a prominent member of the Democratic Party and ran unsuccessfully for congress in 1908. The upper floors of the building were intended for use by the Odin Hall of Scandinavian Brotherhood, a fraternal lodge. The building’s upper floors continued to be used by fraternal groups becoming occupied by the Sons of Norway in 1942. That group restored the building directly to the west in 1965, for use as a new entrance. Known as the Raznik building, this two-story building possesses a striking facade due to its diminutive size and elegant composition. Designed by Joseph T. Levesque, the Raznik building was constructed for Max Raznik and originally housed Bob's Chili and a tavern. The Sons of Norway relocated in 1978 and subsequently, the F.C. Robertson Building was purchased by the Glen Dow Academy of Hair Design. The commercial storefront level of the building has seen a number of occupants, including a cigar store, taverns, cafes, and a State Liquor Store.