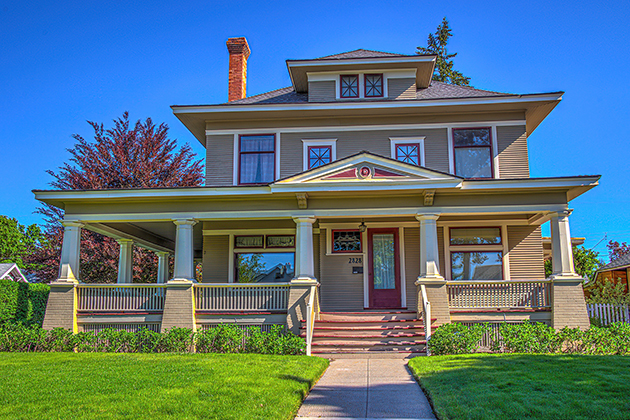 Constructed in 1906, the James-Ammann House was built for Thomas Francis James. At that time, James was a mining engineer for the Coeur d’Alene Mines and his life reflected the itinerant lifestyle of that profession. Born in 1859 in East Norwegian Township, Schuylkill County, Pennsylvania, James was the son of Welsh immigrants who were drawn to the anthracite coalfields opening in eastern Pennsylvania during the 1850s. In 1909, the house was purchased by Henry A. Ammann. The Ammanns were a pioneer family who arrived in Spokane in 1887. The James-Ammann house, being a contributing property in the Nettleton’s Addition Historic District streetcar suburb from Spokane’s most prolific period of growth and the remaining documented example of Alfred Jones Colonial Revival style, today proves itself to be a well-preserved example of both an overall pattern and a singular expression of that pattern.

The James-Ammann House is a contributing property in Nettleton’s Addition Historic District, listed on the National Register of Historic Places in 2006.