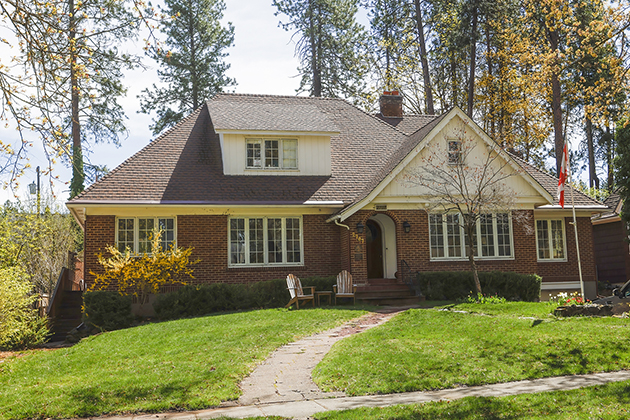 The Frederick House was constructed for Walter E. Frederick and his wife Mabel in 1927. Walter was employed as a salesman for Shaw & Borden Printing Company, a prominent printer-engraver-stationer in downtown Spokane. Mabel Rue Frederick was locally noted in Spokane as the granddaughter of Colonel David P. Jenkins, who was known as one of Spokane’s earliest pioneers and the first settler on the north side of the Spokane river in 1879. Named "Woman Pioneer of the Year" in 1975, Mabel was praised for her civic contributions promoting growth of the Spokane Public Library’s genealogical collection, and for encouraging the study of local and family history in the Spokane area. The Frederick House is also architecturally significant as a fine example of the Tudor Revival Cottage style, and as the prescribed product of protective subdivision regulations which were adopted as binding covenants in the Rockwood district in 1903. The property continues to demonstrate its association with covenants that are still in effect and run with the land in perpetuity.

The Frederick House is a contributing property in the Rockwood Historic District, which was listed on the National Register of Historic Places 4/14/1997.