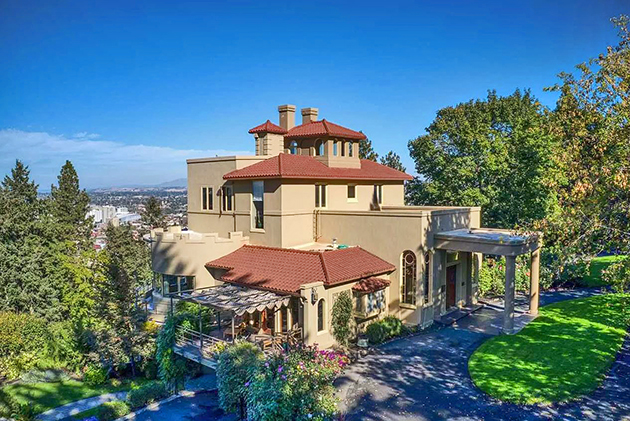 The Senator Clarence and Mabel Dill House is a fine rendition of the Spanish Eclectic style and is one of the largest single-family dwellings in Spokane, WA. Resembling a block of homes in a Spanish village, the Dill House is grandiose with six stories, seven varying roof levels, and numerous wings, bays, balconies and decks. The Dill House is the largest and one of the best residential examples of the work of prominent architect Frederick E. Westcott. The house sits on a sheer cliff and commands of the most spectacular views of Spokane and surrounding northern mountain peaks and was constructed for prominent attorney and former United States senator Clarence Cleveland Dill, and his wife Mabel Dickson Dill, a dietician and educator who founded the home economics department at Whitworth College. During his tenure in Washington, D.C., Senator Dill spearheaded a plan and secured a promise from then-New York governor Franklin D. Roosevelt for the construction of the Grand Coulee Dam in eastern Washington.

Although the Dill House falls within the boundaries of the Marycliff-Cliff Park Historic District, it did not meet the age requirement at the time the National Register nomination was filed in 1979 so is not listed as a contributing property.