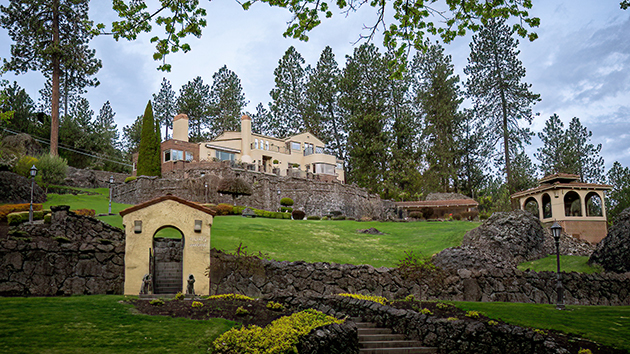 Begun in 1913 and completed in 1936, the Dessert House is one of Spokane’s most unique homes. The home was erected for Victor Dessert and his wife Georges Wilson Dessert, two prominent civic benefactors, city leaders, and founders of the Dessert Hotel chain which included seven hostelries built in Spokane, Ritzville, and Coeur d’Alene.  Perched high atop a rocky precipice above Rockwood Boulevard, the home commands a spectacular view and is an excellent - and rare - representation of the Spanish Eclectic style. With its stucco cladding, multi-level red tile roof and multiple units, the Dessert House resembles the compound plans and varied roof forms associated with Spanish villages. The castle-like thick black basalt rock foundation, curved rock terraces, and rock stairways were designed by Frank G. Hutchinson while the house was designed by Gustave Albin Pehrson.

The Dessert House is a contributing property in the Rockwood Historic District, which was listed on the National Register of Historic Places 4/14/1997.