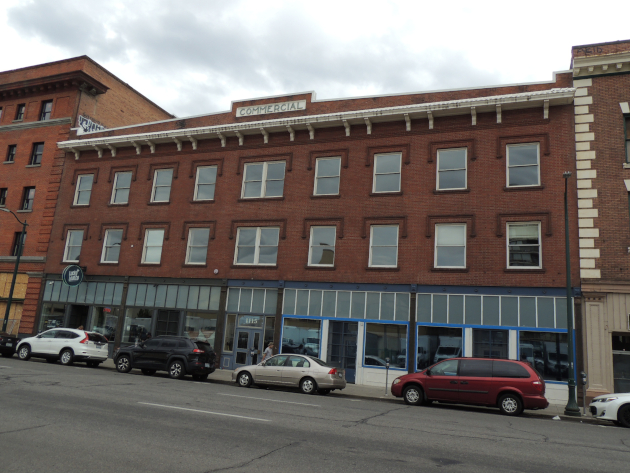 Isaac J. Galbraith designed the Commercial Block for Dr. Joseph Gandy and his wife, Harriet Ross Gandy, on property Mrs. Gandy owned. It was one of the first mixed-use buildings in the neighborhood, built to serve Spokane’s working class. Original tenants of the ground floor commercial space included the Palace Meat Market and the Crescent Furniture Store. The upper floors served as apartments until 1970 and as hotel space until the early 1980s. A 1910 survey of tenants showed them to be employed, unmarried males and females in their twenties and early thirties who stayed in the building for a year or less. The Commercial now serves as housing for formerly homeless people. The building is historically significant as a representative example of a Single Room Occupancy Hotel, a popular form of blue-collar housing in Spokane built in Spokane in the first decade of the 20th century.

The Commercial Block was listed on the National Register of Historic Places on its own merit in 1993 and as a contributing property in the West Downtown Historic Transportation Corridor in 1999.