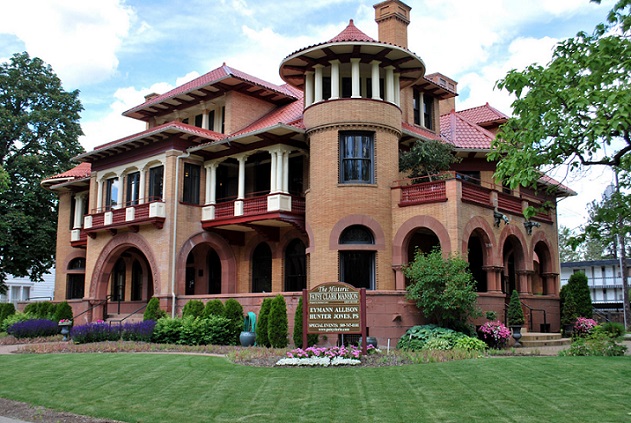 Possessing an eclectic mix of styles, this impressive home was built for Spokane mining millionaire, Patrick (Patsy) Clark, and his family.  Kirtland K. Cutter, Spokane’s most prolific and celebrated architect, designed the residence to be the "most luxurious mansion ever" following a directive from the owner.  Cutter traveled around the world, collecting materials and furnishings for the house - the exterior sepia sandstone is from Italy, the brick was made in St. Louis, Missouri and stained-glass windows were made by Louis Comfort Tiffany in New York City.  Clark lived in the mansion until his death in 1915 and his wife, Mary, remained in the house until 1926.  Eugene Enloe, an investor, purchased the house and sold it by 1950.  The mansion served as the Francis Lester Inn, a restaurant and event house until 1982.  It was then restored as Patsy Clark’s Restaurant.  The Patsy Clark mansion went through several owners in the late 20th century.  It is currently the home of the law firm, Eyman, Allison, Fennessy, Hunter and Jones.

The Patsy Clark Mansion is a contributing property in the Browne’s Addition Historic District which was listed on the National Register of Historic Places in 1976.