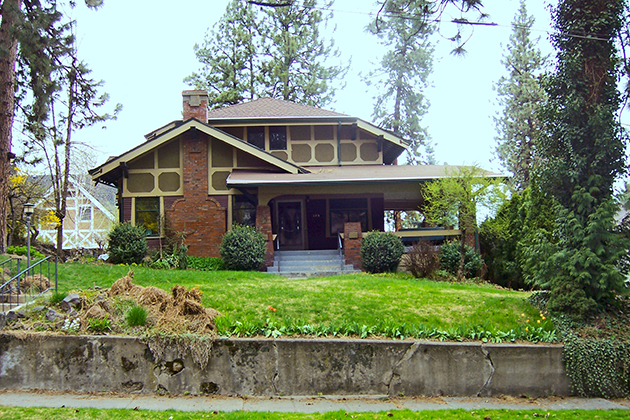 The Joseph Albi House is a fine example of a Craftsman style bungalow. Built by Spokane contractor Walter L. Weld as a “spec” home, the property was given to Joseph Albi and his wife Mazie as a wedding gift from Albi’s parents. During the 43 years that Joseph Albi lived in the house, he became one of Spokane’s most well-known and influential leaders. He was a successful attorney and businessman, philanthropist and civic benefactor, and an indomitable fund-raiser and sports-supporter. Implementing his ideas for the promotion of sports in Spokane, Albi helped found the Spokane Athletic Round Table and served as its president for 42 years. Backed by the organization, Albi spearheaded the fundraising, construction, and creation of the Esmeralda Golf Course and Clubhouse, and the Joe Albi Stadium in Spokane--public facilities that continue to be enjoyed by thousands of people in the Spokane community year after year. In addition, Albi was appointed to act as the Italian Consulate for Idaho and Eastern Washington from 1929 to 1941. A Spokesman-Review article on May 9, 1962 summed up Joe Albi’s contributions to Spokane saying: “He did more for Spokane and the Inland Empire sports world than any other man, ever.”