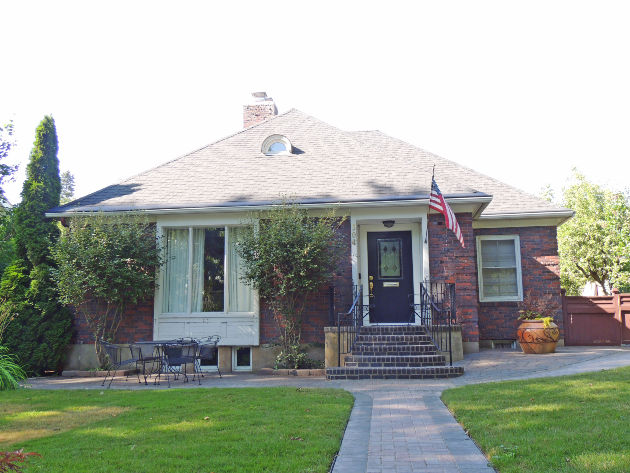 The house at 504 W 19th Avenue occupies a corner site at the intersection of 19th avenue and S. Stevens Street. It is one of the properties at the perimeter of Cannon Hill Park that was developed after the first period of construction; 608 W 19th Avenue was built in 1939 and 614 W 19th Avenue was erected the following year. Henry G. Mansur, a custom house builder, erected the house for Robert H. and Elsa Snow in 1941; no architect was entered on the building permit. The one-and-one-half story house with a brick veneer is set back from a raised front lawn edged with a basalt rubble retaining wall (Fig. 1). Later owners, Dr. Leonard and Nota Dwinnell, built an underground fallout shelter north of the house, as well as an addition to their garage to conceal the escape hatch from the shelter in 1961. The presence of the fallout shelter establishes the historic significance of the property as an example of the pattern of building residential fallout shelters in Spokane during 1959-1961 period.