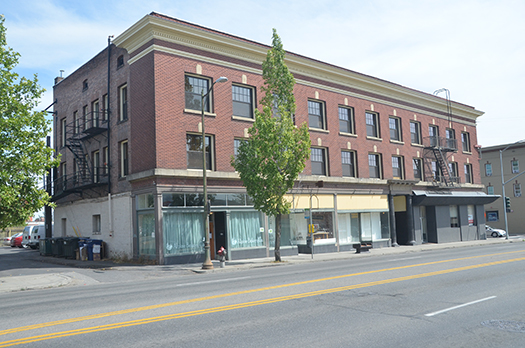 Completed in 1913, the red brick Jenkins Building rises three stories on the northeast corner of Monroe Street and Broadway Avenue, just northwest of the downtown Spokane business district. It was designed by architect Albert Held and retains the distinctive brick and “terra cotta” façade as it did when constructed. The property’s period of significance is from 1913 to 1962 when the southwest corner and south elevation were modernized for Seattle First National Bank – an addition including a drive-through window was added at the same time. The Jenkins Building is eligible under Category A as one of Spokane’s prominent apartment buildings built during one of the most significant periods in the city’s growth. The city’s population and building activity, strong through the 1910s, significantly declined from the upward trajectory it had experienced for nearly three decades. Within this period of growth, the building was a response to the completion of the current Monroe Street Bridge, dedicated in November 1911, and the predicted “boom” of new construction along the Monroe Street corridor on the north bank of the Spokane River. Designed by Albert Held, the Jenkins Building also meets the characteristics of the theme and context established in the National Register Nomination “Apartment Buildings by Albert Held Thematic Group,” and is one of the last buildings in Spokane designed by Held. The building is also eligible under Category B because of its association with Colonel D. P. Jenkins. He is the original owner and his name graces the frieze over the main entry. Jenkins was a major figure in the development of Spokane and he is remembered as one of Spokane’s greatest benefactors. Finally, the Jenkins Building is eligible under Category C, as a landmark on Spokane’s near north side designed by master architect Albert Held. The Jenkins Building displays the classical elements characteristic of the sophisticated design of an accomplished architect.