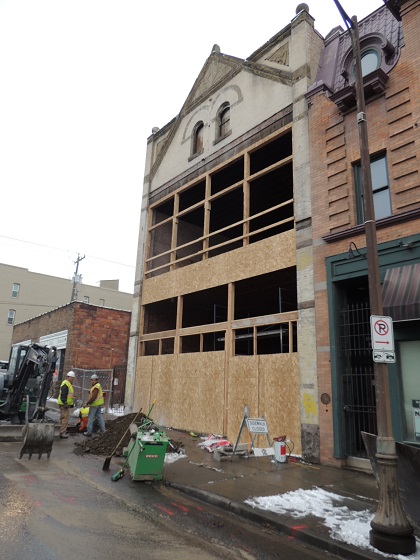 Built in 1905, the Vinther and Nelson Hardware Building was designed by Isaac Galbraith, an architect who practiced in Spokane in the first decade of the 20th Century. It is a good, although deteriorated, example of the brick commercial style that became the dominant architectural idiom in early urban America, especially after fire had ravaged many wood frame structures. Although portions of the front facade of the building have been altered, distinctive historic features remain, such as the detailed bas relief ornamentation. The building was built by two enterprising cousins from Denmark, Samuel Vinther and Nels Nelson, who began their careers in the Pacific Northwest in 1982 as common laborers for the railroads. In little over a decade, they were able to create and maintain a successful hardware store which was managed by their sons until 1963. The Vinther and Nelson Hardware Building is significant for its architecture, its story and its contributions to the economy of Spokane especially as it developed on the north side of the Spokane River, made possible by new bridges and the new street railroad system. The story of two humble immigrants making a go at it, and finding financial success in an environment of bustling commercial activity, surviving even the major mid-century economic downturns, is riveting. The tale of Samuel Vinther and Nels Nelson is a leitmotif of the story of early Spokane.