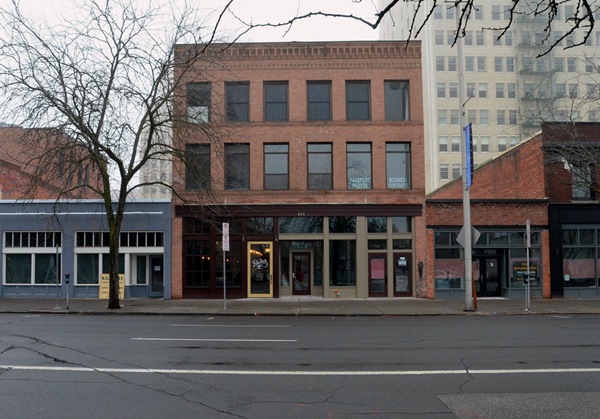 The Jimmy Durkin Building consists of two adjacent buildings that have been combined into one ownership sometime prior to 1948: a three story, brick vernacular commercial Single Room Occupancy hotel built in 1910 and the one story, stucco-clad vernacular commercial building, which was built in 1903, to the east. Both buildings were constructed during Spokane’s most significant period of growth, 1900 through 1910, and remain integral elements of a block that contains three of the earliest of Spokane’s post-fire buildings. The three story building housed the saloon of the Inland Empire’s leading liquor dealer and one of the most colorful characters in Spokane’s early history, Jimmy Durkin. Durkin’s saloon operated into the advent of Prohibition in Washington State, 1916, survived and plodded on after its repeal in 1933. Becoming Dutch’s Loans in the late 1990s, the buildings continued a legacy of pawn, jewelry, second hand and loan businesses on West Main, most owned and operated by Jewish businessmen who would become prominent families in Spokane’s downtown core.