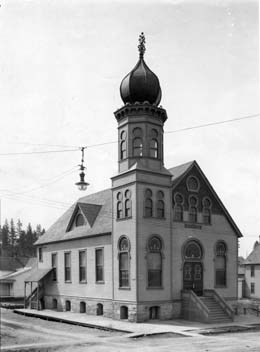 People of the Jewish faith have participated in the social, economic and political life of the Pacific Northwest from the earliest periods of exploration and settlement.  Temple Emanu-El, erected at the corner of Third Avenue and Madison Street, was the first permanent Jewish house of worship in Washington State.  The synagogue, designed by the noted Spokane architect Herman Preusse, was a beautiful wood building with decorative windows, entryways and embellished with a striking "onion dome" on top of its tower.  The building cost about $3,500 to build and was used until a new temple was built at 8th Avenue and Walnut Street in the 1920s.  The original temple remained until 1934.

A marker, erected by the Jewish American Society for Historic Preservation, now sits on the former site of the temple.