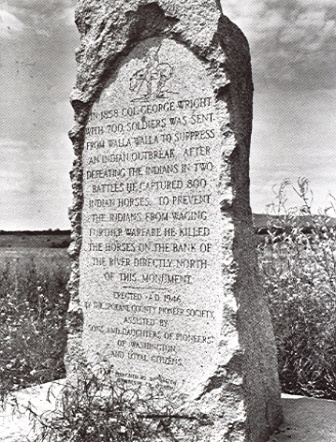 The soberly named Horse Slaughter Camp is a large open space on the south side of the Spokane River near the Idaho border. During the collision between white settlers and native tribes, events occurred in which participants meted out their own versions of justice. After the defeat of the Spokanes, Couer d’Alenes, Yakimas, Palouses and other tribes at the Battle of Four Lakes and the Battle of Spokane Plains, Wright continued to wreak havoc along the Spokane River in an effort to destroy the tribes’ war-making capability. It was here, in September of 1858, that Colonel George Wright killed over 800 horses belonging to a confederation of Plateau Indian tribes. Wright and his men would take two entire days to shoot the horses. Wright then ordered the burning of several storehouses of grain. This cruel act diminished the tribes’ wealth and mobility. Starvation then threatened the confederation that winter and greatly reduced their resistance. This final undertaking led to more whites settling in the territory.


Horse Slaughter Camp is located just west of the 2 mile marker on the Centennial (47.689019, -117.072436). A stone marker, erected in 1946 by the Spokane County Pioneer Society, identifies the site.  Although not listed on the National or Spokane Register, the site has been documented and inventoried.