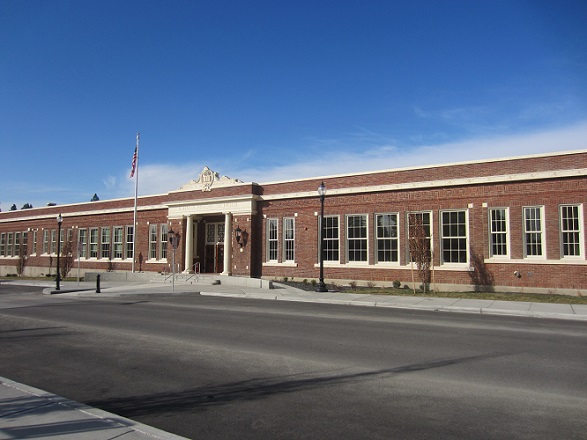 The elegant John A. Finch School was designed by two of Spokane's most influential and prolific architects, Julius Zittel and George Rasque, both of whom achieved praise and admiration for their devotion to the design of educational institutions.  Zittel's Neo-classical influence is seen in the elaborate central entry.  Lovely cream-colored terra cotta scroll-work and columns frame the entrance; the words "Education is the Apprenticeship of Life" emblazoned above.  The entrance is truly striking and the lavish use of expensive terra cotta construction materials is an indication of the School District's desire to create a lasting and monumental structure dedicated to the education of the City's northwest neighborhoods, comparable to those of the more pretentious south side.  Although the final original structure was not fully completed until over twenty years after it was envisioned, the result is an outstanding example of early 20th century institutional architecture created by two of the area's most talented architects.  Originally possessing a U-shaped plan, the school has since undergone intensive restoration and has expanded into an O-shaped plan while still maintaining the integrity and feeling of the original school building.