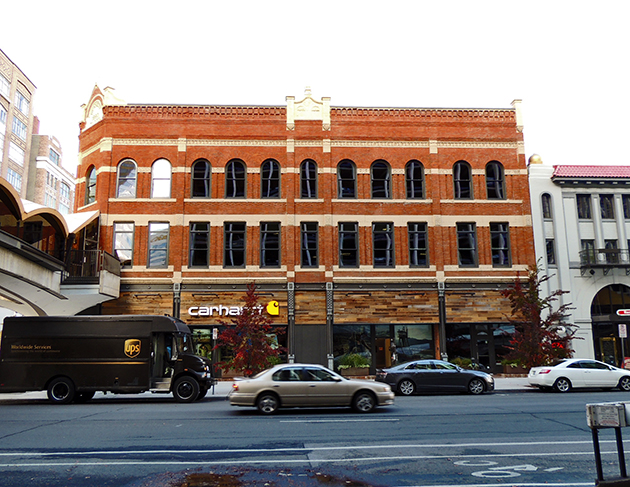 Built in 1890 and 1892, the Bennett Block is composed of three adjoined historic commercial buildings in downtown Spokane.  Visually prominent due to its busy corner site and overall mass, the property is a fine example of vernacular masonry construction that is articulated with red pressed brick, shaped parapets, stained-glass windows and decorative granite and terra cotta embellishments.  The Bennett Block was also one of the first group of buildings erected during the reconstruction of Spokane after the devastating fire of 1889 and its restoration serves to honor the triumphant efforts of those who rebuilt the City of Spokane.  Originally owned by Bascomb H. Bennett, a shrewd businessman, Johann G. F. Hieber began buying financial interest in the property in 1909 and owned the entire block by 1928.  After immigrating to the United States from Germany, Hieber, a certified brewmaster, built the Hieber Brewery in 1890 and continued to expand his landholdings until his death in 1941.  The well-preserved and expansive Bennett Block has remained in the Hieber family ever since.