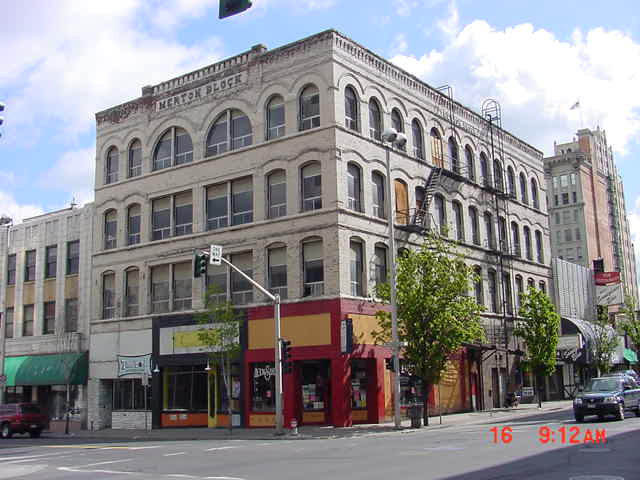 While a nomination was prepared for the Hazel-Merton Block, it was never officially listed before it was demolished in 2004.  No structure has been rebuilt on the site.

Designed by Herman Preusse in the wake of the Great Fire of 1889, the Hazel-Merton Block was a four-story brick commercial building with rough-faced stone detailing, a flat roof and a stone foundation.  It is typical of designs that Preusse rendered for buildings between 1890 and 1893, the busiest years of his career.  It was built for Charles W. Carson, a Spokane restaurateur and early occupants of the building included Edison Electric Illumination Co., the Washington Water Power Co. and William H. Cowles' Spokane Spokesman, which would eventually become the Spokesman-Review.  During Spokane's decade of phenomenal growth and corresponding building boom at the beginning of the twentieth century, the upper floors of the Hazel-Merton Block were also converted from office space into a Single Room Occupancy Hotel.