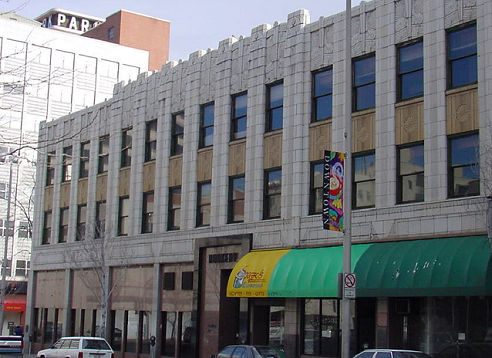 While a nomination was prepared for the Rookery Block, it was never officially listed before it was demolished in 2006. No structure has been rebuilt on the site.

Erected in 1933, the Rookery Building was the premier Spokane example of terra cotta artistry employing Art Deco design elements. Designed by Gustav Albin Pehrson, the Rookery was a three-story brick and steel frame structure with a concrete block foundation and flat roof. It was clad in terra cotta from the famed Washington Brick & Lime Co. of Clayton, Washington and its horizontal emphasis and stylistic design elements, including floral patterns, starbursts, chevrons and fans clearly established it as a high style Art Deco building. Located in the heart of the central business district of downtown Spokane, the Rookery was a strategic and viable commercial space for decades.