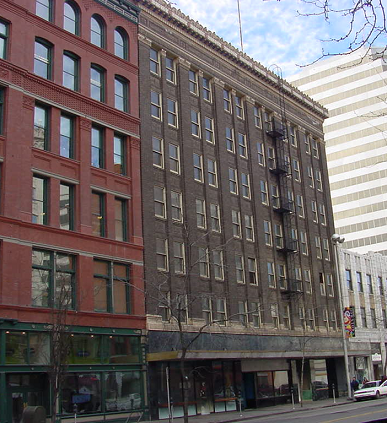 While a nomination was prepared for the Mohawk Building, it was never officially listed before it was demolished in the spring of 2007. No structure has been rebuilt on the site.

Located in the heart of the central business district in downtown Spokane, the Mohawk Building was a seven-story steel frame structure with a flat roof and poured concrete foundation and was a good example of the Chicago School style.  It was designed and built in 1915 to replace an earlier structure, of the same name, which was destroyed by a fire.  The Dodson family, part owners and occupants of the original Mohawk Building, led the rebuilding efforts.  It is architecturally significant as the work of master architect John K. Dow and for the high artistic values that his work conveys, especially in its terra cotta detailing, produced by the Washington Brick, Lime & Mfg. Co.  It is also significant for its long association with the business community and its importance in Spokane's emergence as a regional distribution hub.