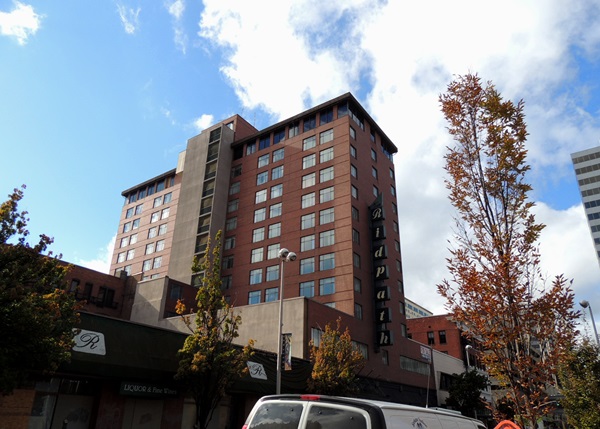 One of Spokane’s most historically and architecturally significant hostelries, the Ridpath Hotel is located in the center of the city’s arts and entertainment district in downtown Spokane. The hotel is comprised of two historic buildings: a tall multi- story, International-style, brick-veneered, steel-reinforced, high-rise tower completed in 1952, and an attached four-story brick masonry construction commercial building built in 1905. The 1952 building is commonly called the Ridpath Hotel “tower” while the attached 1905 building is called the “east wing.” Together, the buildings offer more than 300 furnished hotel guest rooms, a lobby and lounge, cocktail and dining rooms, meeting/convention rooms, commercial shop/store space, a drive-in parking lobby, and a below-ground drive-in parking garage for 100 cars. With 13 floors, the Ridpath Hotel tower rises above surrounding commercial buildings and offers some of the finest and most spectacular panoramic views of Spokane and the surrounding landscape. Like so many historic commercial buildings across the country, the hotel’s street-level storefront facades were modified in the 1970s-1980s with a compatible- contemporary design. Although there have been some modifications, the Ridpath Hotel retains a high degree of historic integrity in original location, design, materials, workmanship, and association.