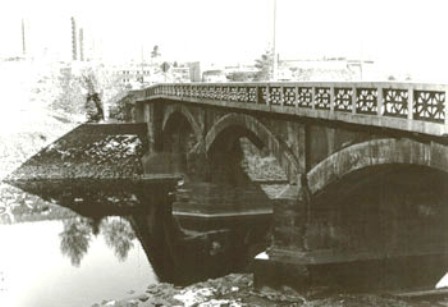 
The historic Washington Street Bridge was demolished. The existing structure at this address is not listed on a historic register.

The Washington Street Bridge was a three spanned reinforced concrete arch constructed in 1908 over the Spokane River. Designed by City Engineer Charles McIntyre and constructed by Wallace-Coates Engineering Company, the bridge was 242 feet long and consisted of three 77 foot flattened ribbed arches. J.B. Strauss of the Strauss Bascule and Concrete Bridge Company of Chicago was the consulting engineer. The Washington Street Bridge was an early example of concrete construction in the state and, when it was listed on the National Register in 1982, was the oldest surviving concrete arch bridge in the state. By January 1983, the bridge was considered unsafe with numerous cracks in the arches and abutments and chipped supports that revealed exposed reinforced steel. The bridge was demolished and replaced in 1983 with the current bridge.