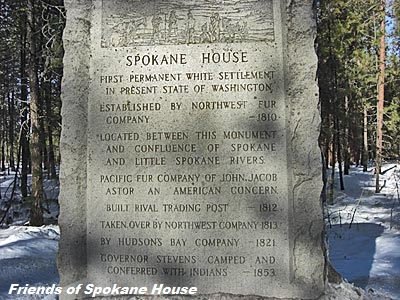 The Spokane House Site is not currently listed on either the Spokane or the National Register of Historic Places but is considered a historically and culturally significant archaeological site.

At the turn of the century, the North West Company, a Canadian firm, started exploration of the fur resources of the inland northwest. David Thompson, explorer-geographer with the North West Company, made his way across the Rocky Mountains in 1807. As a result of these explorations, the trading posts of Kootenai House, Kullyspell House, and Saleesh House were established. In 1810, Thompson established a a small post called Spokane House, built to meet his immediate needs, at the confluence of the Little Spokane and Spokane Rivers. It probably consisted of a store, warehouse, and quarters for the men. In 1811, John Jacob Astor of the American Pacific Fur Company established Fort Jacob near Spokane House. Fort Jacob was short-lived as news of the War of 1812 between the United States and Britain spread. By 1821, in an act of Parliament, the Canadian North West Company was absorbed by the British Hudson Bay Company. In 1826, Spokane House was considered to be a less than ideal place for a trading post, and after 16 years of continuous occupation was abandoned for Fort Colvile. Although archaeological studies have been made of this site, such as the inventory comnpleted in 1968, the precise location of Spokane House remains unknown. The Washington State Parks and Recreation Commission has developed a Spokane House site for the enjoyment and education of visitors.