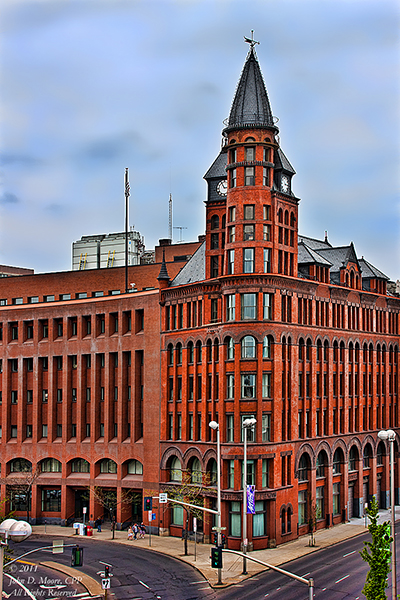 The Review Building houses the offices of the Spokesman-Review, Spokane’s principal newspaper. One of the tallest buildings in Spokane, its tower is taller than the main roofs of the Paulsen Medical and Dental and Old National Bank buildings. Since its construction, it has been one of the most conspicuous buildings in town, as the architect, Chauncey B. Seaton, designed it to fit the irregular shape of the lot. Seaton came to Spokane in the aftermath of the Spokane Fire in 1889 to help rebuild the city. In 1890, he designed and supervised the construction of the Spokane Exposition Building. Although he designed the Review Building, he left before it was completed. In its early days, the building housed the Hotel Review in the upper floors. It also housed the Spokane Daily Chronicle until the build ng became too crowded, and the Chronicle moved into its own building in 1921. The Review Building was erected to house the Review, an evening daily paper, which was established by Frank Dallam as a weekly paper in 1883. Its closest competitor was the Spokesman, a democratic paper owned by a group of Spokane businessmen. In 1893, the competition between the two newspapers necessitated a merger if either was to survive. Out of this the Spokane Morning Review was born, under the management of Harvey Scott, H. L. Pittock, Anthony Cannon, and W. H. Cowles. The Panic of 1893 hurt the paper, and Cowles came to Spokane from Chicago to salvage it. He gained total control and created the Spokesman Review. W. H. Cowles was an important and influential businessman in Spokane. He was a founding member of the Spokane Chamber of Commerce, regional director of the Boy Scouts of America, and director for the Associated Press for thirty-three years. Theodore Roosevelt, Herbert Hoover, and William Howard Taft sought his advice. The family still owns and runs the paper and are generous civic benefactors in Spokane.