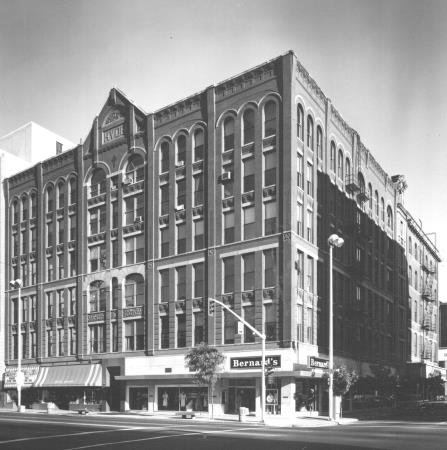 The historic Hyde Building was demolished and removed from the National Register.

The Hyde Building replaced an earlier three-story structure of the same name on this site, which was built for owner Eugene B. Hyde and consumed in the fire of 1889. Hyde, the city’s first Marshall, Chief of Police and Chief of the Volunteer Fire Department, rebuilt his building in a more elaborate fashion using imported brick from St. Louis and brick from his own brick yard in Hangman Valley. Designed by Londoner William J. Carpenter, who also designed the Miller Building, Loewenberg House, and Couer d’Alene Hotel, the structure served as U.S. Court during the 1890s and featured two of Spokane’s most popular bars at the time: the 'Court Saloon’ and 'Court Annex’. In 1908 after much litigation, "Little Denver," the most expensive property per square foot, was purchased to the rear of the site so lavatories could be added at all levels. Architect Albert Held designed the addition which simply became known as the Annex. The Hyde was a seven story red brick structure with granite, sandstone and terra cotta detail. Sandstone spandrels with acanthus scroll design and a sixth floor arcade were arresting details. The roof line was dominated by a steeply pitched gable parapet. Rustication of brickwork was evident on the second floor and the name was inscribed in the gable parapet.