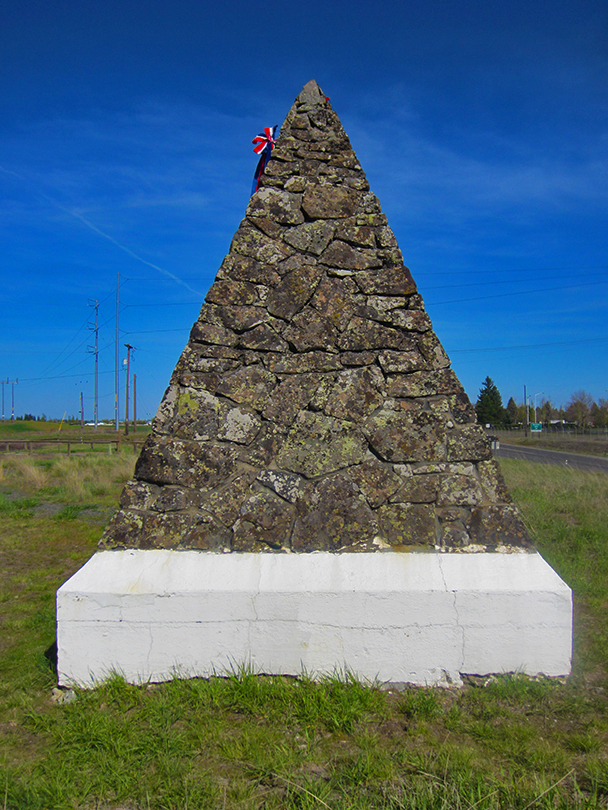 Composed of basaltic rock, the large pyramid sits on what is now the Battle of Spokane Plains State Park and offers impressive views of the surrounding flat lands.  The Battle of Spokane Plains, known to the Spokane Tribe as the "Big Fight," was the culmination of a punitive expedition led by Colonel George Wright in the summer of 1858 in retribution for a skirmish that erupted when a party composed of Spokanes, Couer d’Alenes, Yakimas, Palouses and other tribes refused passage to a military expedition under Colonel E. J. Steptoe.  After engaging and defeating the combined Indian forces in a running battle at Four Lakes, Wright’s troops fought them again at Spokane Plains on September 5.  After another victory, Wright wreaked havoc along the Spokane River in an effort to destroy the tribe’s war-making capability.  He burned food stores and lodges before gathering up and slaughtering a herd of approximately 600 Indian horses.  After dictating the terms of peace, Wright summarily hanged Indians that he determined had committed depredations against whites, including Qualchan, the son of upper Yakima chief Owhi.  On the last day of September, Wright declared: "The war is closed."  The plaque reads: "Commemorative of the Battle of Spokane Plains, fought on September 5, 1858."  A second plate on the monument further reads: "The Battle of Spokane Plains was fought near this spot on September 5, 1858, in which the U.S. Troops under command of Col. George Wright defeated the allied Coeur d’Alene, Palouse, and Spokane Indians."

The Battle of Spokane Plains Monument was inventoried on March 10, 1970 but is currently not listed on the Spokane or National Register.