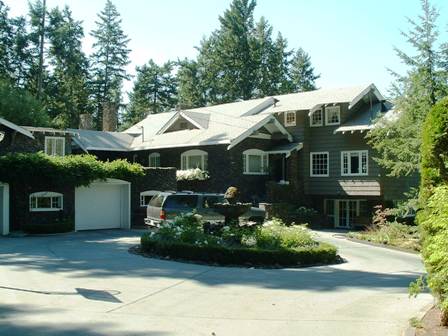 The Wilbur-Hahn House is architecturally significant as an outstanding example of Craftsman style architecture. It was designed in 1916 for Ralston “Jack” Wilbur, a partner and salesman with Hallide Machinery Company, and his wife Sarah E. Smith, the controlling stockholder of the fabulously lucrative Hecla Mining Company. Wilbur commissioned prominent Spokane architect G. A. Pehrson, a personal friend, to design the home. The plans are reported to have been completed in partnership with K. K. Cutter, Spokane’s most celebrated architect; Pehrson was employed in Cutter’s firm at the time. In addition to its association with the Wilburs, the home is also historically significant as the long-time residence of Rudolph Hahn, a controversial figure in Spokane who lived in the home from 1924 to 1945. Hahn held lavish parties in the home, entertaining noteworthy figures like Lt. J. Doolittle, later leader of the famous Doolittle Raid during World War II. He moved out of the house a few years after his wife committed suicide in it, in the same year he was convicted for illegally performing abortions. He was found murdered in his apartment downtown in the New Madison Hotel the next year.