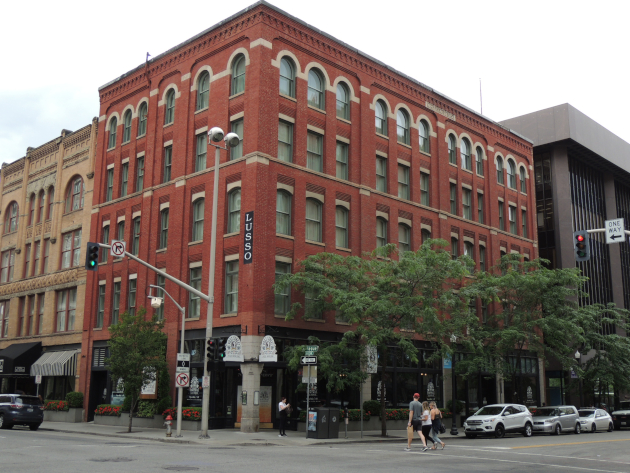 Completed in 1890, the year after Spokane’s Great Fire, the Whitten Block is historically significant for its association with Spokane’s emergence as the commercial center and transportation hub of the Inland Northwest. The building is also architecturally significant as an one of a mere handful of buildings that have survived from the rebuilding effort that followed the fire. It is, moreover, the only remaining commercial structure in Spokane designed by architect Lorenzo Boardman. Finally, the building is significant for its association with Spokane pioneers Leyford B. Whitten and Georgia Ballou Whitten. L. B. Whitten came to Spokane as a carpenter, but soon established himself as a successful mining and real estate investor. In 1888 he married Georgia Ballou, one of Spokane’s first female physicians. Some of Spokane’s best-known businesses got their start in the Whitten Block. Louis Davenport lived in the building, where he had his restaurant before erecting his landmark Davenport Hotel and restaurant across the street, on the opposite corner of the intersection. Spokane’s famous Crescent Department Store was another early occupant of the building. The building was recently renovated and, together with the Miller Block, adjacent next west, now houses a luxury hotel, the Lusso.