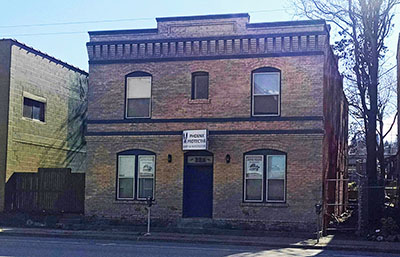 The Washington Post Building is historically significant for its association with Otto Jukeland, a pioneer leader of Spokane’s German immigrant community and co-founder of The Washington Post, the largest Germanic Language newspaper in the Northwest. The building, completed on the eastern edge of Spokane’s Central Business District in the summer of 1903, was the first permanent home of the newspaper. Jukeland arrived in Spokane from Leipzig, Germany in 1886. In February of 1889, he founded The Washington Post, together with fellow immigrant A. M. Armand. First published from Room 22 in the Eagle Block, the newspaper found an eager readership among the city’s growing German community, and Jukeland bought out Armand in 1900. Subscription continued to grow so that by 1910 the newspaper had already outgrown the building, and the presses were moved to the newly completed Germania Building, a larger facility at the corner of Third and Browne designed for Jukeland by the noted architectural firm of Preusse & Zittel. Preusse and Zittel are also thought to have designed the Washington Post Building.