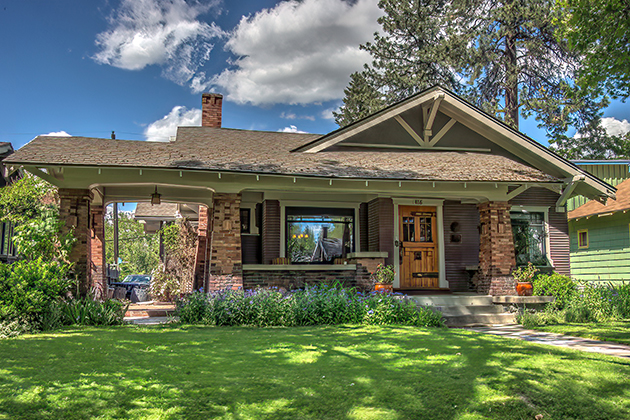 Built in 1912, the Tuell House is a hallmark example of the Craftsman style bungalow. It was designed by William J. Ballard, founder of the Ballard Plannary Company, a prominent Spokane architectural firm. Regarded as contemporary and modern for its time, the home was constructed as a “spec house” by Spokane carpenters and building contractors Thomas & Jordan, and was reported to cost between $5,500 and $8,000. The property was purchased before it was completed by Spokane pharmacist, Frank Tuell and his wife, Maude Tuell, who made it their home for 17 years. During its period of significance from 1912 to 1929, the property achieved importance as a product of accomplished architect, William Ballard, and as an example of the type and quality of dwelling specifically planned and prescribed through neighborhood design covenants for the Cannon Hill Park Addition. Like the Tuell House, the homes that were built in the area, along with the restrictive design covenants that were created to guide the area’s domestic architecture, demonstrate broad trends and patterns associated with the early twentieth-century planned urban development of the Cannon Hill Park neighborhood and surrounding residential neighborhoods located on Spokane’s South Hill.