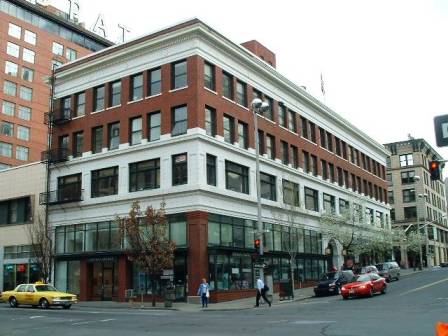 Built in 1917-1918, the Symons Block is architecturally important because it reflects the attention to style and investment in quality materials and construction that were still attributes of Spokane’s commercial architecture following the city’s greatest era of expansion and development. The highly-regarded architectural team of Archibald Rigg and Roland Van Tyne, known for several Spokane landmarks, designed it. It is also important for its association with pioneer Spokane business investor Colonel Thomas W. Symons and his son, who helped bring broadcast radio to the Northwest. For many years the home to Spokane’s first radio station, the building is historically significant for its association with the development of the area’s local and national broadcasting media. An integral part of Spokane’s business community, the Symons Building also has street-level spaces that have housed some of Spokane’s best-known businesses.