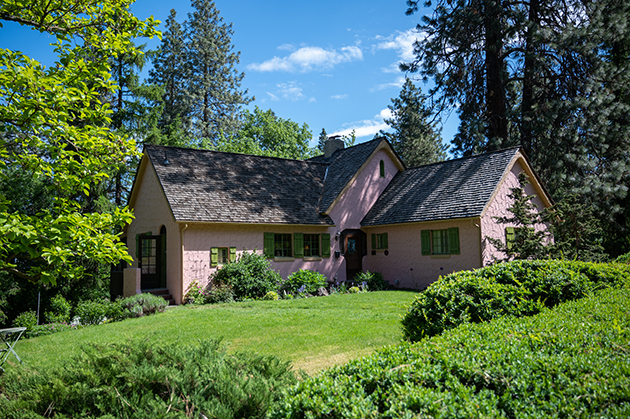 Built in 1926, the Solby House is a picturesque example of the Tudor Revival “Storybook” style. It was constructed for Margaret Solby and William Solby. The home was custom-designed by Solby and Bertelsen & Wells, a prominent Spokane architectural firm, and was built to resemble the “old-fashioned North European type of farm house remembered by Mr. Solby” from his childhood in Copenhagen. With its unique golden-colored false-thatch, rolled-edge roof, hand-troweled soft pink stucco walls, and turquoise blue window shutters, the Solby House was an embodiment of the Storybook-style aesthetic. The house was featured with much aplomb on a three-page spread in the Spokesman-Review just after it was built in 1926. The newspaper venerated Solby as “a recognized expert on decoration” and touted the home’s “distinctive old English” design. The Solby House was additionally showcased in a May 1927 Good Housekeeping Magazine story with descriptive narrative and photographs of the exterior and interior. Especially during its period of significance, which is noted as the year it was built,the Solby House achieved importance in the context of “art” and “commerce” as the home of William Solby, and in the context of “architecture” as a fine example of high artistic values and the Tudor Revival Storybook style.