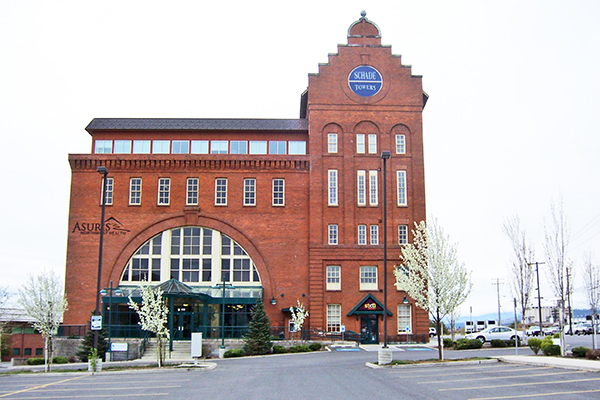 The Schade Brewery as it stands today was constructed in four phases: ca. 1902, 1903, 1907 and 1934-37.  A striking landmark, and local manifestation of national trends, the old Schade Brewery provides a prominent physical reminder of past social, industrial, and architectural eras. The building takes its name from Bernhardt Schade, the brewmaster who had the building erected in 1903. Schade served as assistant brewmaster at another Spokane brewery, the New York Brewery, for a decade prior to establishing his own brewing operation. In 1903 he bought the entire oversized city block on East Trent from a Mr. Frost. Included in the purchase was a cold storage building Frost was constructing on the site. Schade hired the architect Lewis Stritesky, designer of the prominent Westminster Apartments at 2301 W. Pacific in Spokane, to design a facility based on drawings of a European brewery. Stritesky created a new western addition for the building begun by Frost. A bottling building and steam/pump house were also built on the property. Initial production was 35,000 to 40,000 barrels a year.