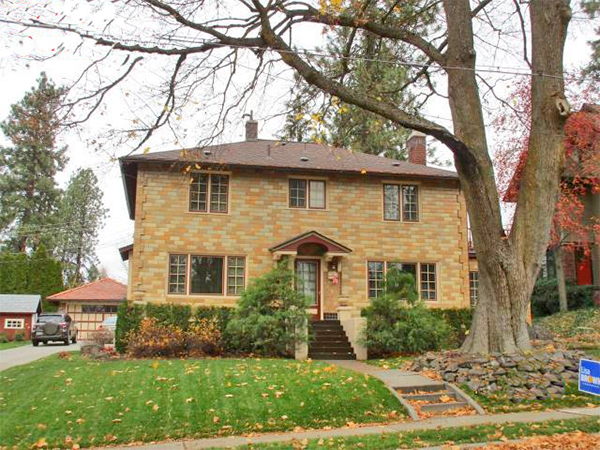 Constructed in 1923, the Victor & Jean Piollet House is a unique expression of the Colonial Revival style with influences from Craftsman, French Eclectic and Italian Renaissance traditions. The most striking feature of the home is its exterior cladding, a decorative veneer of high-quality, multi-colored, glazed enamel-faced brick that completely covers the first and second floors of the two-story house. Similar in appearance to large glazed ceramic subway tiles, glazed enameled face bricks were sometimes used in Spokane as exterior veneer material on commercial buildings and only rarely on single-family homes, mostly as decorative embellishment at front entrances. The Piollet House may be the only home in Spokane which is entirely clad with the material. The garage, built in 1928 behind the Piollet House, is made of hollow-core ceramic tile block construction and is covered with a glazed red tile roof.

The garage’s hollow-core ceramic tile blocks and glazed ceramic roof tiles, and the home’s enameled face bricks were all made by the Washington Brick, Lime & Sewer Pipe Company which advanced a creative marketing approach in the 1920s when they showcased their products at the Piollet House and garage. A pioneer in the brick and tile business, the Washington Brick, Lime, & Sewer Pipe Company was, at the turn of the 20th-century, one of the first and “largest brick manufacturing facilities in the state of Washington,” and was in production in the Spokane area for more than 70 years. The company’s marketing approach also included the property’s first owners Jean and Victor Piollet, the sales manager and later, vice-president, of the WBLSP Company from 1912 through 1932.