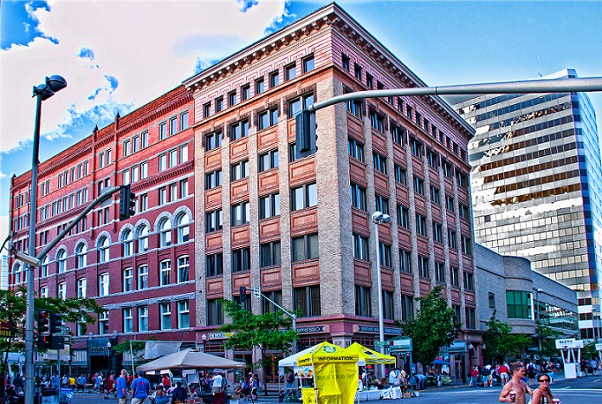 Built in 1898, the Peyton Building rose from the ashes of the Great Eastern Building (1890), which suffered a tragic fire that left only the exterior walls intact. Colonel Isaac N. Peyton purchased the property in 1898 and built the Peyton using the remaining walls of the Great Eastern. In 1908, the Peyton Annex at 10 N. Post Street was constructed adjacent (south) of the Peyton Building. At the time, the Annex was only the second reinforced concrete building in Spokane (the Holley-Mason Building was the first). Seven stories, the Annex is characterized by its three classical parts: base, shaft, and capital. Both the Peyton Building and Annex were known as first class commercial locations called the "million-dollar corner."  The Peyton Building and Peyton Annex stand together as one of several remaining large commercial buildings in downtown Spokane designed in the Romanesque revival and Commercial styles.