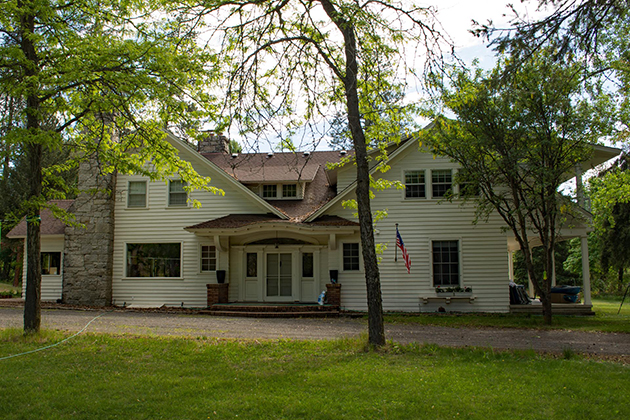 Established between 1897 and 1898, Montvale Farm is significant for its association with two of Spokane’s most prominent and influential business and civic leaders: Judge John W. Binkley and Aubrey Lee White.  Judge Binkley was a “city pioneer” and founder of the prominent Spokane law firm, Binkley & Taylor.  Elected on the Democratic ticket, Binkley served as probate judge for Spokane County in 1885 and 1886 and was instrumental in the development and successful growth of the Dutch-owned Northwestern & Pacific Mortgage Company, the Northwestern Hypotheekbank.  He was also involved with the North Pacific Loan & Trust Company's banks that loaned more than $1 million dollars for the rebuilding of the city after the 1889 fire.  Around 1898, Binkley, an avid outdoorsman, purchased more than 300 acres in the vicinity along Rutter Parkway and the Little Spokane River, a natural wetland river valley located nine miles northwest of Spokane.  He built a four-room cabin along the north shore of the river, lavishly entertained his friends and such Spokane luminaries as Louis Davenport, John Finch, and Royal Riblet with hunting and fishing expeditions and summer barbeques, affectionately calling his gentlemen’s mountain valley get-away “Montvale Farm.”  Aubrey Lee White, who married Binkley's daughter, Ethelyn, owned the property beginning in 1928.  White, who was nicknamed the "Father of Spokane Parks," was President of Spokane's first park board.