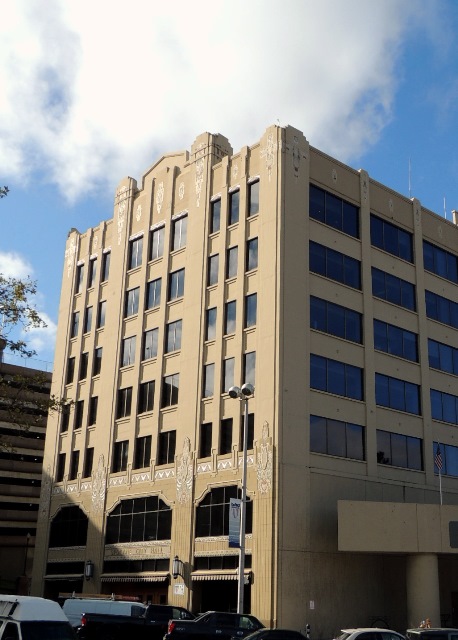 Designed by the Montgomery Ward Engineering Department and built by Wells Brothers of Chicago, the Montgomery Ward Building is historically as well as architecturally significant to the history of Spokane.  The building occupies a spectacular site in the Central Business District overlooking the Lower Spokane Falls and River.  The building represents an important chapter in the history of American commerce and stands as one of the first local examples of the Art Deco style that was popular, albeit briefly, across the nation at the time.  The playfulness of the Art Deco style is lavishly employed in decorative floral panels and the color variation across the facade, which was achieved with rose, ochre and green aggregate in the concrete mix.  Montgomery Ward remained in the building until it moved to a new store on Division in 1978.  The following year the City of Spokane purchased the building and converted it into the City Hall. Today, the third floor is home to the Historic Preservation Department!