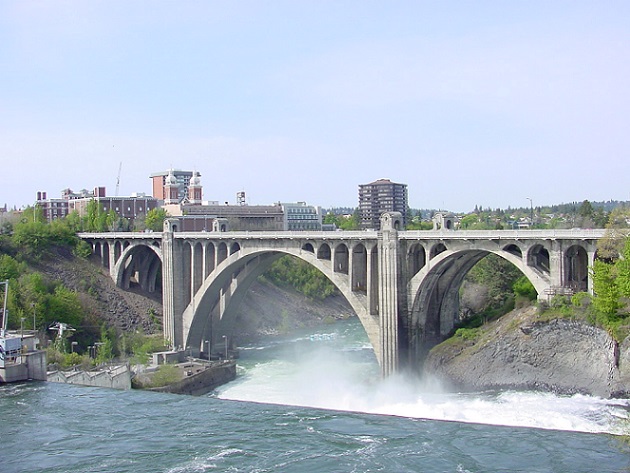 Spanning the Spokane River Gorge just below Spokane Falls, the Monroe Street Bridge is a city landmark.  When the structure was completed in 1911, the 281-foot concrete central span was the largest in the United States, edging out Cleveland’s Rocky River Bridge by a foot, and the third longest in the world.  The design process for the bridge began in 1909 and building the grand triple-arched bridge was an arduous task.  Laborers hired by the city (fully half the eventual cost of $535,000 went to wages) dangled above the rapids below on towers and cables, working to demolish the old steel bridge, constructed in 1891, and build cribbing for the new one.  Shortly after demolition began, fill on the south bank collapsed, leading to the collapse of the old bridge. As the new bridge was being constructed, a violent windstorm destroyed weeks’ worth of labor on the central arch.  City engineer J. C. Ralston, with assistance from Morton McCarthy, who designed the ill-fated Tacoma Narrows Bridge, J. F. Greene, and P. F. Kennedy, designed the structure.  The design for the superstructure was prepared by Spokane’s most celebrated firm of architects, Cutter and Malmgren.  It reflects the city’s pride in its pioneer heritage, with its western decorative motifs, including chain-shaped concrete ornamentation on the railings and four “covered wagon”-shaped pavilions adorned with cast-concrete bison skulls.  Residents of Spokane, proud as they were of the grand new bridge, had to wait nearly 60 years to see it unobstructed.  In 1914, just three years after it was built, the Union Pacific Railway built a trestle across and above it.  The trestle was removed in 1973, in conjunction with preparations for the 1974 World’s Fair held in Spokane.  Listed on the National Register of Historic Places in 1975, all but the central span of the bridge was demolished and completely reconstructed starting in 2003. The bridge reopened in September 2005.