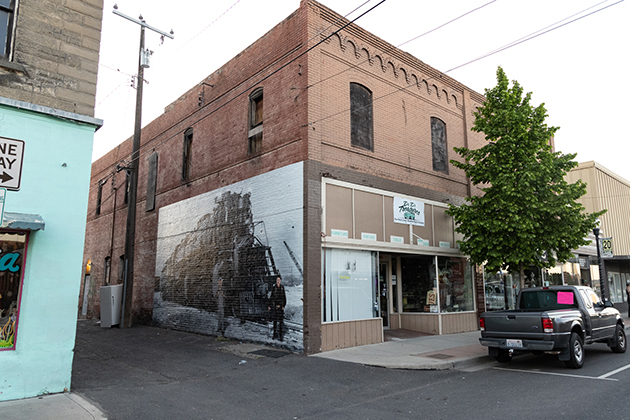 The two-story Minthorn-Russel Block has an arcaded corbel cornice and is divided into two bays by brick pilasters at the corners.  The original storefront configuration is intact with two recessed entrances.  A faded advertisement painted in 1903 is located on the north elevation of the building and reads, "Drugs, Russel Hotel, Rooms for Rent."  The building was built for druggist Sherman Minthorn and for merchant Robert Russel with eight single-occupancy hotel rooms on the second floor known as the Russel Hotel.  The Hillyard City Drug occupied the north storefront from 1903 to 1985 and the south storefront was occupied by the Buckley Clothes Shop.  Beginning in 1935, the Capitol Bar occupied the south storefront.

The Minthorn-Russel Block is a contributing property in the East Downtown Historic District, which was listed on the National Register of Historic Places in 2002.