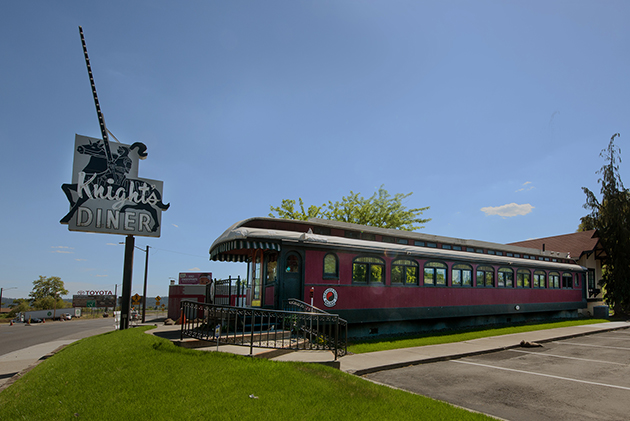 The railcar that houses Knight’s Diner was built by the Pullman Car Company of Pittsburgh, Pennsylvania in 1906 and served the Northern Pacific Railroad as car number 988. During World War II the car, which had been retired to the Northern Pacific Yards in the Spokane Valley, was pressed into service as an indoctrination classroom for the war effort.  President Franklin Delano Roosevelt subsequently offered the car as a gift to a Spokane resident in appreciation of his years of voluntary service traveling the country as “Uncle Sam” in support of the war effort.  John (Jack) Knight, formerly the headwaiter at the Davenport Hotel, renovated the car for use as a diner in 1949.   Knight’s Diner has retained a high degree of integrity since construction in 1906, even during its later reuse as a diner.  It is significant as both a well-preserved turn of the twentieth century all-wood Pullman car and as an outstanding example of an American roadside diner.