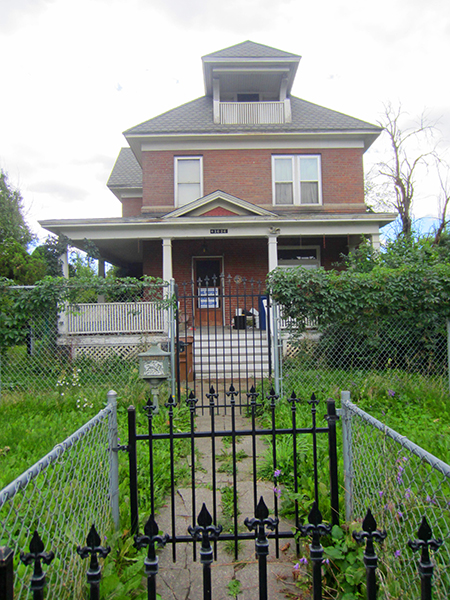 Henry Klein was a "stout and husky" man who was in every sense a businessman. A German immigrant who relocated to Spokane from Pennsylvania, Klein and his partner, Claus Frahm, founded Spokane Foundry Works in 1899, which prospered at the turn of the 20th-Century. In 1902, he commissioned the stately 2 1/2 story home in the middle class suburb in East Central. The home is a relatively rare example of a brick Queen Anne style house with touches of American Foursquare. Significant exterior features include the wraparound porch, decorative shinglework, bay window and decorative porch pediment. Originally, the home’s interior walls were constructed with lathe and plaster and were painted in calcimine wall colors. The home boasts hand-painted ceiling and wall murals featuring whimsical Art Nouveau-inspired vines, flowers and cupids. Interestingly, the foundry is noted for manufacturing manhole covers that still cover some Spokane streets and the Klein House today maintains a preserved, decorative furnace cover made by the foundry.


In 1938, Henry Klein gave to his wife, Ida, his home and his foundry works "for and in consideration of love and affection." One year later on February 5, 1939, Henry Adam Klein died at the age of 72.